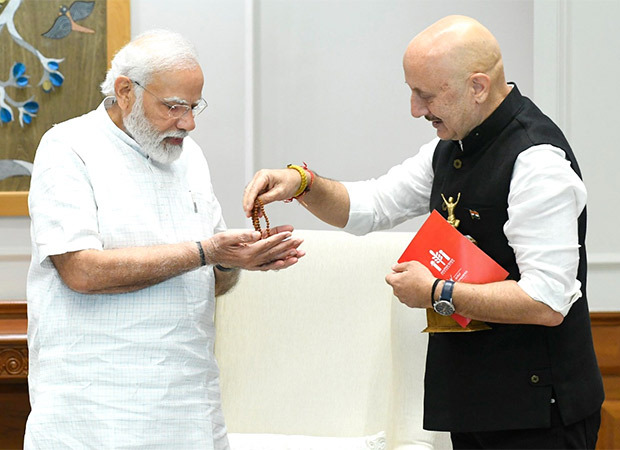 Taking to his Twitter handle, Anupam wrote in Hindi, “Respected Prime Minister Narendra Modi. It was a great pleasure to meet you. The hard work you are doing day and night for countrymen is inspiring! I will always remember the reverence with which you accepted the rudraksh mala sent by my mother to protect you. Jai Ho. Jai Hind.”

Responding to Anupam Kher’s tweet, PM Modi wrote, “Thank you very much, Anupam Kher. It is only the blessings of respected Mataji and countrymen which motivates me continuously to work in service of the nation.”

Last month, Modi had praised the film The Kashmir Files in which Anupam Kher was the lead actor. Directed by Vivek Agnihotri, the film is based on the Kashmiri Pandit exodus that happened in the 1990s. The film broke records at the box office.

Meanwhile, on the work front, Anupam Kher will soon essay the role of the protagonist’s father-in-law in the ABC comedy pilot The Son in Law and star alongside Reema Sampat, Chris Sullivan, and Meera Simhan as one of the leads. On Wednesday, Anupam Kher took to his Instagram to share the news. Along with the picture, he captioned the post as “Happy and excited to share with you all this fantastic news about my next overseas pilot project #SonInLaw. Looking forward to joining the team. Jai Ho! #SonInLaw @abcnetwork #KuchBhiHoSaktaHai #Series (sic)”