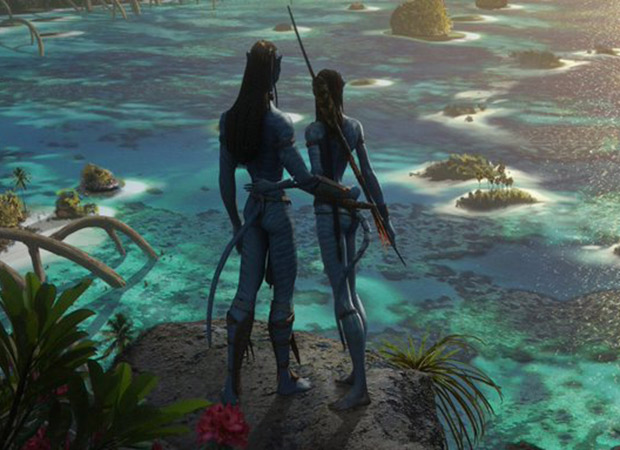 According to Deadline, now titled Avatar: The Way of Water, the 20th Century Studios sci-fi adventure releases overseas starting December 14 and heads to North America on December 16. Producer Jon Landau came in from New Zealand to make the Disney presentation at CinemaCon in Las Vegas. It was also revealed that Disney will rerelease the original Avatar on September 23 around the globe with remastered audio and sound.

Set more than a decade after the events of the first film, Avatar: The Way of Water will follow the next chapter in the lives of Sam Worthington’s Jake and Zoe Saldana’s Neytiri and begins to tell the story of the Sully family, Jake, Neytiri and their kids, and the trouble that follows them, the lengths they go to keep each other safe, the battles they fight to stay alive and the tragedies they endure. “I know one thing,” Sam Worthington’s Jake Sully tells Zoe Saldana’s Neytiri. “Wherever we go, this family is our fortress.”

CinemaCon attendees were reportedly given 3D glasses to watch the minutes-long trailer, which contained almost no dialogue. Instead, exhibitors were immersed into different regions across the magnificent world of Pandora through sweeping visuals of the planet’s crystal blue oceans and lakes. The footage also shows the local tribe of Na’vi interacting with various species resembling whales and pelicans, some of which flew through the screen and into audience member’s faces thanks to the three-dimensional technology.

“One of the strengths of Jim Cameron’s scripts is they are always universal and relatable themes that he weaves into them,” Landau said. “At the center of each of the four sequels will be the Sully family. Each story will be a stand-alone and each will come to its own conclusion.” There will be a “fulfilling resolution to each film, but when looked at as a whole the journey across all four will create a larger epic saga. The journey across all four movies will create a connected saga. To achieve our goals, we need a strong partnership with you and the studio … an end-to-end community,” the Oscar-winning producer added.

#Avatar2 has been officially titled, ‘Avatar: The Way of Water’

via @Disney at #CinemaCon pic.twitter.com/NpJ54KZHgO

James Cameron beamed in from Wellington, NZ where he’s shooting, expressing sympathy for exhibition about the industry’s hardships during the pandemic. He told exhibition, “I just want you to hear it from me: Jon and I are here to work with you,” he said. “The best way is by delivering content that is a must-see experience at the cinema.” The Oscar-winning filmmaker said he was “hard at work putting the final touches on the film.” He added that the new films are “pushing limits even farther with high frame rate, higher resolution 3D and greater reality in our visual effects. I wanted our return to Pandora to be something really special. Every shot is designed for the biggest screen, highest resolution and most immersive 3D available. I think we pulled it off.”

The upcoming Avatar franchise boasts a star-studded cast of Kate Winslet, Edie Falco, Michelle Yeoh, Vin Diesel, Jemaine Clement, and Oona Chaplin with a slate of young actors alongside returning cast members Sam Worthington, Zoe Saldana, Joel David Moore, Dileep Rao, Stephen Lang, Matt Gerald, and Sigourney Weaver. The trailer will debut exclusively in theaters ahead of Marvel’s Doctor Strange in the Multiverse of Madness on May 6. Take a look at the stunning visuals from the trailer below!