South Korean zombie apocalypse drama All Of Us Are Dead, which premiered on Netflix on January 28, has reached No. 1 on Netflix making it the third K-drama on the streaming giant to achieve this milestone after Squid Game and Hellbound. The series stars Park Ji Hu, Yoon Chan Young, Cho Yi Hyun, Park Solomon, Yoo In Soo, Lee Yoo Mi, Kim Byung Chul, Lee Kyu Hyung, and Jeon Bae Soo. 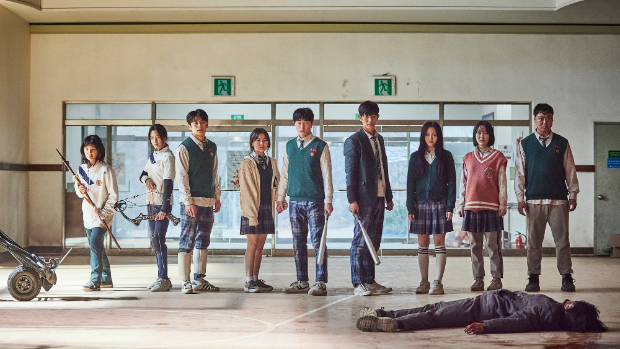 According to Deadline, “Zombie YA series All of Us Are Dead, which rose to No. 1 in its seventh day of release vs. Day 4 for Squid Game, clearly rode on the latter’s coattails, benefitting from the skyrocketing interest in Korean dramas in the wake of Squid Game‘s phenomenal success.”

In a recent interview with Edaily Korea, All Of Us Are Dead director Lee Jae Gyu talked about his show’s global success and shared, “I truly can’t believe all the love it has received from so many countries around the world.”

“I think this will come as a great relief to all the actors and staff who devoted themselves to this project for two years,” he said.

The series revolves around a set of high school students who are trapped inside their school campus amidst a zombie-virus outbreak. The students must fight their way out or turn into one of the rabid infected. The series is adapted from a webtoon, Now at Our School by Joo Dong Geun, which was published between 2009 and 2011.