In today’s times, several actors have worked in path-breaking films and attempted risqué scenes. Yet, the commercial Bollywood stars are still wary of doing it. Even kissing on screen was a taboo at one point and it’s only in the last 2 decades that it has become common. As for nudity, Hollywood mainstream performers haven’t shied from doing so but our heroes and heroines are still not up for it. 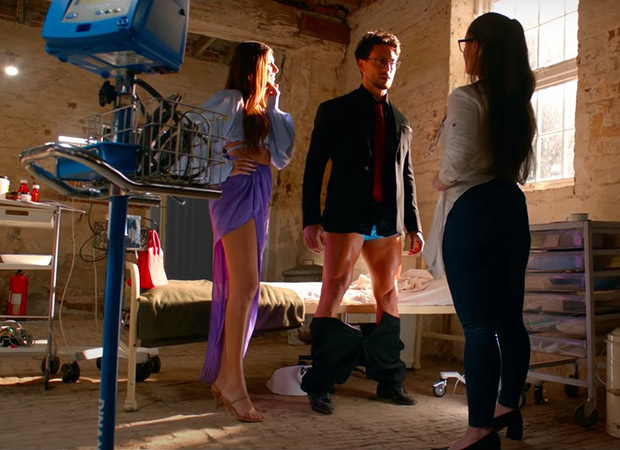 Hence, audiences got a surprise when a star like Tiger Shroff bared his posterior in Heropanti 2. The action entertainer was released today and in a couple of shots, his butt can be seen. Tiger Shroff plays a hacker named Babloo who is pretending to be MJ and hiding in Yorkshire. As Babloo, he had dated Inaaya, played by Tara Sutaria. When Inaaya sees Babloo in Yorkshire, she confronts him and asks him why he left her all of a sudden. Babloo, who doesn’t want his real identity to be unveiled, pretends to be MJ and that he doesn’t know Inaaya. At this point, Inaaya asks him to pull down his pants. She claims that Babloo has a mole on his butt and that if he is Babloo, then he’ll be exposed. Babloo protests but Inaaya’s colleague manages to strip him.

At this point, audiences expect that it’ll simply be implied that Inaaya’s colleague has pulled down his pants and checked his posterior. Shockingly, Tiger Shroff’s butt is actually shown, though from the sideways. And that’s not all. In a later sequence, Babloo gets shot on his butts. The scene where the bullet is removed from his bum is also shown in the film.

In fact, one can say that Tiger Shroff’s derriere plays an important part in the film. A couple of jokes are also made about it by Inaaya. In another scene, he gets hit by a parking barrier from behind. He’s already shot on his butts and this gives him even more pain.

Tiger Shroff is the third big star of Bollywood to push the envelope in this regard in recent times. John Abraham gave a glimpse of his sexy posterior in Dostana (2008). It has become a part of his sex appeal even today. 6 years ago, Ranveer Singh gave a full show of his butt in Befikre (2016), though just for a quick second.